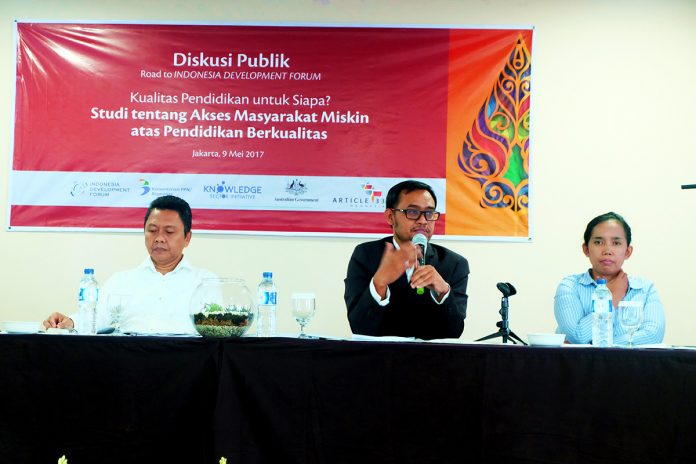 As part of the Road to Indonesia Development Forum 2017 series of events, Article 33, a KSI policy research partner, held a public discussion on the Quality of Education. Held on 9 May at the Four Points Hotel, Jakarta, the event presented a study by Article 33 on Access of the Poor to Quality Education.

In his remarks as the KSI representative, Hans Antlov said that while 20 percent of the state budget was already allocated to education, the quality of Indonesia’s higher education had improved little. This was influenced, among others, by the conditions of basic education.

The study covered access to and improvement of education, which has also been the focus of the Ministry of Education and Culture (Kemendikbud). More than a decade after the constitution was amended to allocate 20 percent of the state budget to education, access to education has increased. A study by the World Bank in 2016 showed that school participation had increased over the previous years, however the critical issue was the quality of education poor people received. Santoso, the Executive Director of Article 33, explained the correlation between economic background and learning achievements. The poorer people are, the less likely they are to receive a high-quality education. “Poor people tend not to get quality education, so they are unable to leverage their education to lift them up from poverty. What is required is to provide quality education to them. The problem is not only whether people have access to school, it’s more about getting quality education,” he said.

Totok Amin Soefijanto from Universitas Paramadina said education was influenced by four factors: household characteristics, a child’s characteristics, the quality of education, and the benefits of education. The poorer people were the less benefit they saw in sending their children to school, while the quality of schools was usually low in poor areas. These factors explain in part why poor people were less motivated to send their children to school.

Heni Kurniasih from the SMERU research institute, a KSI policy research partner, described a related study on the common threads of quality and access to education for poor people. As Indonesia is facing a middle-income trap in the coming years, the study said it was critical to improve the quality of education. Heni Kurniasih said this should become an important target in national development.

Another issue raised during the discussion was the importance of paying attention to poor people with disabilities. The Law on Disability states that national development must create and provide inclusive education.

The event was covered by major national media, such as Kompas, Media Indonesia and Republika. See links: