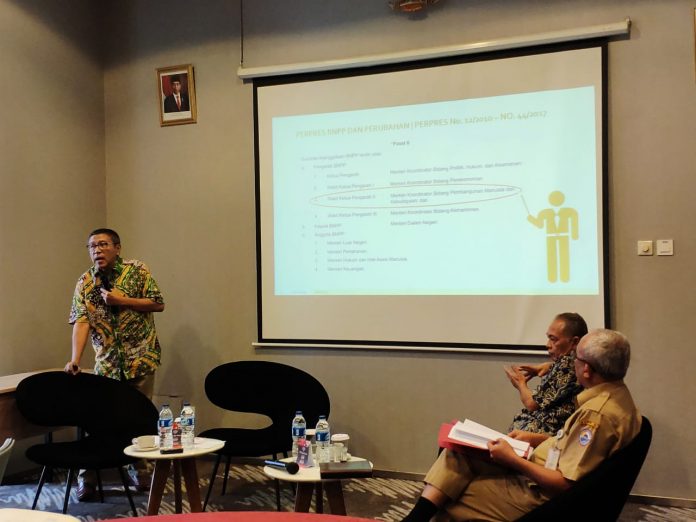 Article 33 Indonesia in mid-2019 began to conduct a joint study with the KEMENKO PMK related to strengthening the role of the Kecamatan in the border area. On 10th December 2019, dissemination was conducted with the theme “Border Area Development: Security or Welfare Perspective?”. The dissemination was attended by Risfan Munir as the researcher of the study, Wijanarko Setyawan as the Assistant Deputy for Strategic and Special Region Empowerment, KEMENKO PMK; (3) F. Gatot Yanrianto as Assistant Deputy for Potential Marine Areas Border of BNPP.

This study is motivated by the weak role of the Kecamatan in development in the border area, whereas the Kecamatan should be able to be the main actor who is able to coordinate development from the lower and upper levels (Village and District). In addition, the role of a stronger Kecamatan is also needed so that the stigma of the border area which initially became the backyard of the State can be transformed into the frontier territory of the State. The study was conducted in two regions, Serdang Bedagai District (Sergai) and North Timor Tengah (Timor Tengah Utara/TTU). The number of Lokpri at TTU is much higher, covering 7 Kecamatan compared to Sergai, which only has 1 Kecamatan, namely Tanjung Beringin. Nevertheless, Lokpri in Sergai has become strategic in the presence of Berhala Island, with a distance of 22 miles, expanding the sea area from only 12 miles. The Lokpri at TTU shares land borders with Timor Leste in the Oecussi enclave.

During the last five years, the development policies of the border region are still inward-looking, but gradually it has begun to change into outward-looking. This means that the border area is a front gate or porch in our relations with neighboring countries. Article 33 Indonesia researcher Risfan Munir explained that the government’s focus on the kecamatan Lokpri was beneficial because the approach allowed budgets to come from above, namely ministries/institutions at the national level and regional government organizations at the provincial and district levels, and from below, namely villages, with the existence of village-owned enterprises and village funds. The facility is intended to reduce the level of isolation of the Lokpri area.

Assistant Deputy for Strategic and Special Empowerment of KEMENKO PMK, Wijanarko Setyawan, explained the framework of coordination of development and welfare in border areas. In this regard, KEMENKO PMK focuses on accelerating basic services. In general conditions of isolation and limited access at the border cause poverty and low basic services. Each district is tasked with carrying out basic services, by making the border region a part of regional development. As an illustration, in total there are 187 kecamatan throughout Indonesia scattered in 13 provinces and 41 districts/cities covering 1,674 villages/kelurahan, spread almost evenly both in the west (65), central (60), and east (62) Indonesia. Regarding the condition of the border areas, the Human Development Index in 2015-2018 shows an increase in growth in both disadvantaged areas (3.46%) and border areas (2.89%), exceeding the growth of the national HDI (2.65%). In contrast to what has been said, Wijanarko pointed out a contradiction in development at the border. In Sintang Regency, the border areas are mostly conservation areas, making development difficult. In it, there are also indigenous people who have not received legal protection.

Assistant Deputy for Potential Marine Region Borders of the BNPP, F. Gatot Yanrianto highlighted another aspect of the border area problem, which concerns security to the environment. For the record, Indonesia’s land border reaches 3,152 km with a coastline of 99,900 km or number two in the world after Canada. Indonesia is bordered by land with 3 countries, namely Malaysia, Papua New Guinea, and Timor Leste, while the sea border is 10 countries.
There are 4 main aspects of border management. First, the management of state borders, including among other things the completion of land, sea and air borders and their use. So far there are 2 boundaries that have not been agreed upon in East Nusa Tenggara (NTT), while many sea and air boundaries have not been agreed upon. Second, management across national borders, including the prevention of criminal borders, illegal trafficking, and terrorism. Third, the development of border areas, where the problem that is quite dominant is electrification. Almost all problems at the border, especially in the island region, must be provided with generators, plus fuel supply problems. In addition, the internet network is quite needed by the border areas as well as the current computer-based school exams. Fourth, institutional management, the need for the formation of a BPPD that requires a Regional Regulation (Perda), intense consultation is needed with the Ministry of Home Affairs in its formation process.