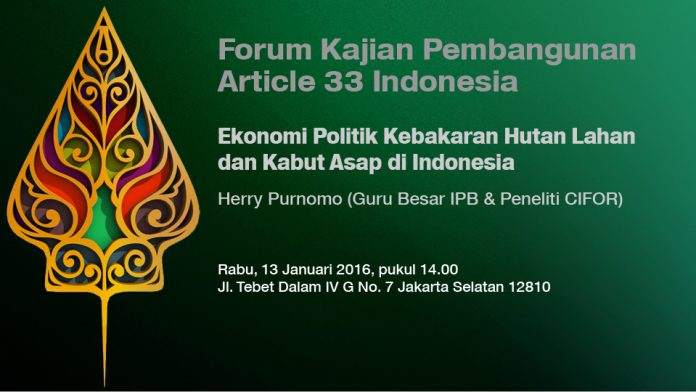 Herry Purnomo (CIFOR & IPB) blamed three root problems which lead to recent forest fires causing 2.6 million ha of land burnt and more than $30 billion of economic losses in Indonesia. First, unclear land tenure and illegal land market which creates a lot of conflicts amongst community, state and corporate. Second, bad practices in agricultural and plantation development. Third, land politics. Herry argued why these matters are the root causes of fire forests in Indonesia with his research conducted with Bayuni Shantiko (previously with CIFOR, now UNIDO). The results were presented at 13 January 2016 FKP hosted by Article 33.

The study analyzed the case in Riau Province. Forest fires occurred intensely in land managed by corporation. Although corporations only own 34 percent of the land (around 35 billion ha) but almost half of hotspot (45%) located in these land. Herry stated that burning the forest is a cheap way for corporation to clear the land and then later sell or use it for palm-oil plantation. Most of the benefit raised from burning the forest (57% of $856/ha), fall to group organizers (corporate), the other received by other actors i.e. village head & officers (10%), farmer group who did the cutting (9%) and burning (2%), etc. These conditions creates incentives for illegal land market to rise rapidly. Fun fact: when Herry did field survey on the matter, he was offered by someone to buy few hectares of land in the location. In fact, Herry did social network analysis and found that local elites (cukong)—like the one who made an offer to Herry—who organize farmers are the most influential actors in land transaction.

Herry also suspected patronage network between business and government also play part in forest fires in Indonesia. He checked the data and run a model. Indeed, he found a significant relationship between the number of hotspot in a certain year (t) and local election next year (t+1). He also did a network analysis on this issue, and found that corporate actors connected to elites at various levels. He called this phenomena “Land for Votes”.