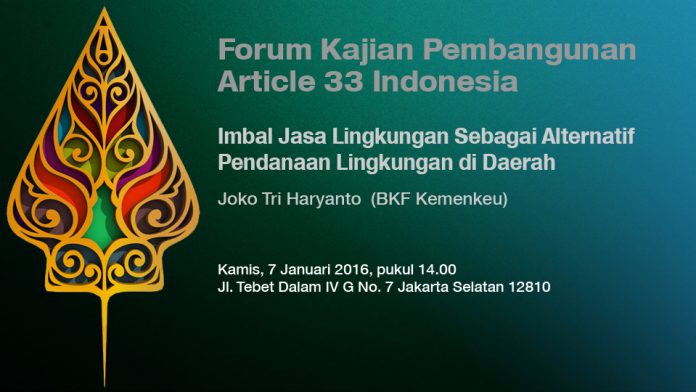 Joko Tri Haryanto (Fiscal Policy Agency – MoF) shared a study regarding payment ecosystem services (PES) implementation in Indonesia at the 7 January 2016 FKP hosted by Article 33, an NGO working in issues related to natural resources. “In order to tackle environmental problems,” Joko argued, “Indonesia not only needs political will from the government, but also instruments outside [the conventional] budget mechanisms.” For one thing, the budget is only able to allocate up to 20 percent of its expenditure to finance government’s environmental programs. Hence, instruments which rely on market mechanism are ideal solution.

To implement PES, we have to build a new paradigm in which we value correctly value the benefits that ecosystems give us; good quality of air we breathe, for example, is extremely undervalued. PES is important since it provides a new source of income for land management, restoration, conservation, and sustainable use activities. So, the ecosystem would be able to “finance” itself to keep itself healthy. In spite of that, the local government is still playing an important role as regulator who calculate the economic value of the services and received the payment, then use the money to conserve the ecosystem.

Two study cases were delivered by Joko in the seminar: implementation in Pagar Alam, South Sumatra and Pangandaran, West Java. In South Sumatra, the local government of Pagar Alam City asked for a payment from the provincial government, since their efforts in protecting the forests in their area also benefs Palembang and other cities around it. After the claim was verified, the payment was transferred. On the other hand, Pangandaran, a region which relies on natural tourism faced various kinds of ecosystem problems: one of which was rampant billboards—which decrease the satisfaction from enjoying the view. The provincial government then formed advertising zones with different tariff for different location, and “no advertising zone” where billboards are forbidden—but if one insists on installing one in it, they have to pay a much larger cost. In both cases, Joko found that command and control mechanisms were not enough to curb negative economic externalities — they have to be strengthened by providing actors with incentives through market-based instruments.